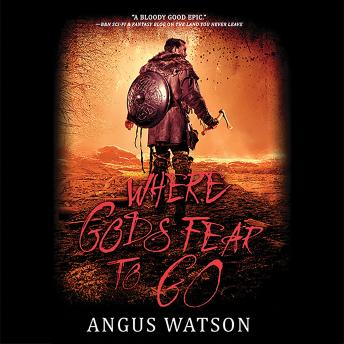 Where Gods Fear to Go

The outrageously thrilling West of West trilogy comes to an action-packed close in Where Gods Fear to Go -- a gritty epic fantasy journey in which a mismatched group of refugees battle animals and monsters, an unforgiving land and each other as they cross a continent to fulfill a prophecy.
Battling across the Shining Mountains, the questers discover a land more terrifying than they ever could've imagined--and they've fought thunder lizards.
All the while fighting and falling in love, the tentatively allied Wootah and Calnians must survive monster attacks, flash floods, and tornados to uncover the secret of The Meadows. And then comes the hard part.
To save themselves and everybody else, they will travel west of west, deeper into danger...and attempt to take on a goddess who has already killed all the gods.

West of WestYou Die When You DieThe Land You Never LeaveWhere Gods Fear to Go
For more Angus Watson, check out:
Iron AgeAge of IronClash of IronReign of Iron span

Where Gods Fear to Go