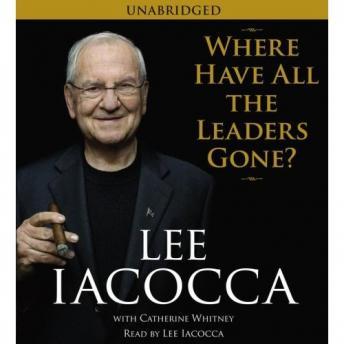 Where Have All the Leaders Gone?

The late, legendary auto executive Lee Iacocca has posed a question for every American: Where have all the leaders gone?

The most widely recognized business executive of all time asked the tough questions that America's leaders must address:

• What is each of us giving back to our country?
• Do we truly love democracy?
• Are we too fat and satisfied for our own good?
• Why is America addicted to oil?
• Do we really care about our children's futures?
• Who will save the middle class?

A self-made man who many Americans once wished would run for president, Iacocca saved the Chrysler Corporation from financial ruin, masterminded the creation of the minivan, and oversaw the renovation of Ellis Island. Iacocca believed that leaders are made in times of crisis—such as today. He knew more leaders than almost anyone else—among them nine U.S. presidents, many heads of state, and the CEOs of the nation's top corporations—and is uniquely suited to share his wisdom, knowledge, and wit about the leadership of America.

Author of the gigantic number one bestsellers Iacocca: An Autobiography and Talking Straight, Lee Iacocca famously didn't mince words and in this, his last book, offers his no-nonsense, straight-up assessments of many of the most well-known American politicians of the era.

Confessing that he has 'flunked retirement,' Iacocca calls on citizens of all ages to vote, get involved, and choose our leaders carefully. Along the way, he shares stories about the prominent people he's met and known, including the time he smoked cigars with Fidel Castro, what Bob Hope told him about how to live a long life, what Lady Sarah Ferguson said to him as they danced, why Bill Clinton woke him up in Italy, what Robert McNamara taught him about success, how Frank Sinatra sang for him personally, and whom Pope John Paul II asked him to pray for. We learn what he discussed with Warren Buffett, DaimlerChrysler CEO Dieter Zetsche, Ronald Reagan, Senator John Kerry, Congressman John Murtha, Prince Charles and Camilla, former Saudi ambassador Prince Bandar, rapper Snoop Dogg, financier Kirk Kerkorian, Ted Turner, Bob Dole, and many more.

Knowing that the times are urgent, the iconic leader shares his lessons learned and issues a call to action to summon Americans back to their roots of hard work, common sense, integrity, generosity, and optimism.

Where have all the leaders gone?

Lee Iacocca has the answer.

Where Have All the Leaders Gone?