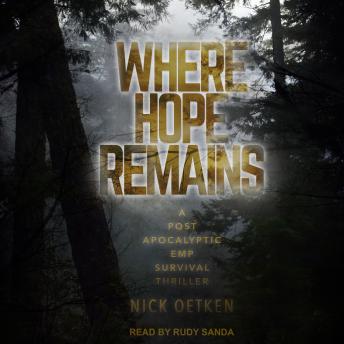 One moment everything is perfectly normal, and in the next the power grid across the entire United States goes down and sends the country back to the Stone Ages. The lights flicker out. Cars crash. Phones and laptops quit working. Planes fall from the sky. Fires rage. Hoards of angry mobs take to the street looting and pillaging. Millions perish in the horrific aftermath.

With the cities completely overwhelmed with death and destruction, the forests of the Pacific Northwest seem to be the only place of possible safety or refuge. That's what brothers Randall and Thomas think as they fight their way to their family's secluded cabin to locate their grandparents, parents, and cousins, only to instead find themselves proven completely wrong as a new deadly threat from the woods emerges.

Trapped in an unforgiving world without help, Randall, Thomas, and the rest of their family must trust in one another and put their skills to the ultimate test to fight back against the overwhelmingly dark forces that now directly threaten their very existence.