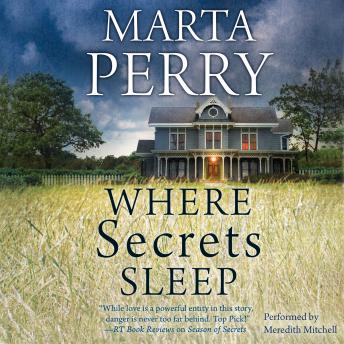 #1 of House of Secrets

In small town Laurel Ridge, not everything is as simple as it appears

After a terrible betrayal, Allison Standish flees Philadelphia for the small Amish village of Laurel Ridge to claim an unexpected inheritance. Allison intends to sell the mansion housing various shops on Main Street—until she meets Nick Whiting, a single father and tenant of Blackburn House, who challenges everything she believes about her estranged grandmother and the Amish community.

Strange stipulations in her grandmother's will soon bring distant relatives and seething townsfolk to Allison's door. As anonymous threats escalate, Nick grows protective of Allison, and she finds herself falling for the handsome carpenter… But then she discovers her grandmother's death may not have been accidental, and someone wants Allison gone. Permanently.

I love Marta Perry's books but this one dragged on very slow. I could hardly get into it. I was disappointed to say the least. I feel like I wasted my money. Sorry Marta. The narrator was fine. I think she did a good job.