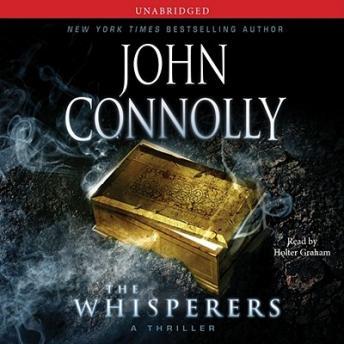 The Whisperers: A Charlie Parker Thriller

New York Times bestselling author John Connolly chills with this brutal, spine-tingling Charlie Parker thriller depicting a terrifying consequence of the Iraq War that nobody could have foreseen.

In the dark reaches of Maine’s North Woods, a group of Iraq War veterans are engaged in a ruthless smuggling operation across the Canadian border. But what they have unleashed is far more dangerous than even they realize—an ancient evil locked away in Iraq for centuries.

Evil has dogged Charlie Parker’s steps, costing him his career as a cop and his license as a private investigator. Now, as veterans begin dying mysteriously, he is called in to stop the bloodletting. But the smuggled objects have attracted the attention of the reclusive Herod and his henchman, the shadowy figure he calls the Captain. To defeat them, Parker must form an uneasy alliance with a man he fears more than any other: the killer known as the Collector.

Not one of his best.