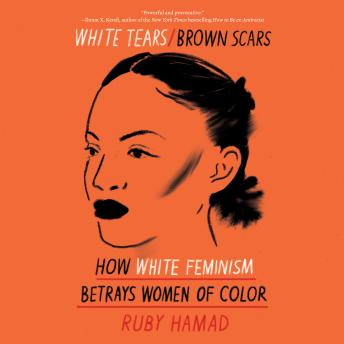 Called 'powerful and provocative' by Dr. Ibram X. Kendi, author of the New York Times bestselling How to be an Antiracist, this explosive book of history and cultural criticism reveals how white feminism has been used as a weapon of white supremacy and patriarchy deployed against Black and Indigenous women, and women of color.

Taking us from the slave era, when white women fought in court to keep 'ownership' of their slaves, through the centuries of colonialism, when they offered a soft face for brutal tactics, to the modern workplace, White Tears/Brown Scars tells a charged story of white women's active participation in campaigns of oppression. It offers a long overdue validation of the experiences of women of color.

Discussing subjects as varied as The Hunger Games, Alexandria Ocasio-Cortez, the viral BBQ Becky video, and 19th century lynchings of Mexicans in the American Southwest, Ruby Hamad undertakes a new investigation of gender and race. She shows how the division between innocent white women and racialized, sexualized women of color was created, and why this division is crucial to confront.

Along the way, there are revelatory responses to questions like: Why are white men not troubled by sexual assault on women? (See Christine Blasey Ford.) With rigor and precision, Hamad builds a powerful argument about the legacy of white superiority that we are socialized within, a reality that we must apprehend in order to fight.