The Whithering of Willoughby and the Professor: Their Ways in the Worlds: The Best of the Comedy-O-Rama Hour, Season 3 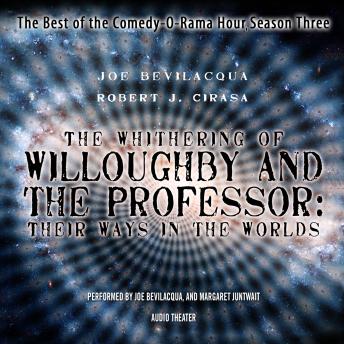 This is an epic science fiction/fantasycomedy about a boy and his professorwho travel willy-nilly across time and space in a failed attempt to "cure theworld of all its ills."
Stories include:
Episode One: "I'll Teach You!" or "Boxof Nothing" Episode Two: "Holy Smoke" or "The Red-Suited Man" Episode Three: "More Edible Than Durable" or "You Smashed My Monkey!" Episode Four: "Oh Boy, She Looks Great!" or "Which Witchway is Which?" Episode Five: "Your Separate World Lines" or I'm Big and You're Small" Episode Six: "Now It's Time To Sing!" or "Unwanted Noises in the Air" Episode Seven: "I Like This Box!" or "Oh Victim Man!" Episode Eight: "Oh Dalai" or "Life is Dukka" Episode Nine: "The Traveling Extravaganza" or "His Name is Bub" Episode Ten: "More Dogs For Me?" or "Knock-a-knock-knuckles"Episode Eleven: "You're a Messiah" or "Buboes in the Lymph Nodes" Episode Twelve: "A Box in the Dark" or "Dead Men Do Not Groan" Episode Thirteen: "Is Eloquence a Bauble" or "Where's My Cyaneus Episode Fourteen: "I Do Not Like the Blackness of Her Nose" or "The PenguinsLaugh at You!" Episode Fifteen: "The Genius of These Woods" or "I'm Also Wearing Explosives"Episode Sixteen: "Say Jacques!" or "She's Got Kneepads!"

Whithering of Willoughby and the Professor: Their Ways in the Worlds: The Best of the Comedy-O-Rama Hour, Season 3