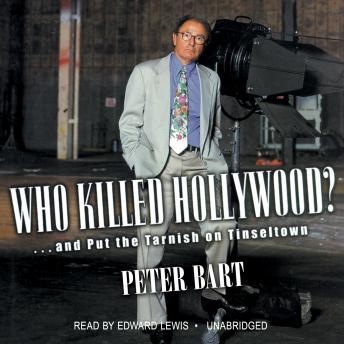 Who Killed Hollywood?: And Put the Tarnish on Tinseltown

In this passionate love-hate letter to the film industry, Peter Bart pulls together his best columns from Variety and GQ, outlining in detail the history and inner workings of Hollywood. In story after story, Bart shows how the major studios have diverted their energies away from production of the shrewdly crafted pictures that once made the industry powerful. There are only a handful of salable subjects in the movies today: natural disasters, aliens, dinosaurs, ghosts, monsters, or any combination thereof. All are subjects easily parlayed into theme-park environments, action figures, video games, and clothing lines. Even the once edgy independent producers like Miramax and New Line have been acquired by conglomerates. Who and what will resurrect Hollywood? Peter Bart has the answers.

Who Killed Hollywood?: And Put the Tarnish on Tinseltown