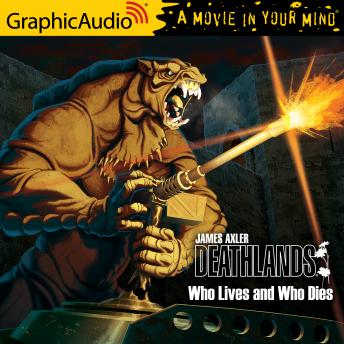 Who Lives and Who Dies [Dramatized Adaptation]

Ryan Cawdor has been narrowly rescued from a harrowing, uncontrolled plummet through the maelstrom of time, only to find himself stranded in a place outside of the reality he knows, his savior not quite the man he appears to be.  At the Cawdor family home of Front Royal, the companions meet Ryan's long lost son, who is no longer who he once was. They learn Front Royal has fallen to invaders, forces under the command of a long-time bitter enemy, and constant nemesis. Woefully outnumbered, as the birth of Krysty Wroth's child grows imminent, the reunited companions must somehow devise a way of stopping the monsters and madmen who collectively are the Magus. Performed by Richard Rohan; Colleen Delany; Terence Aselford; Delores King Williams; Alejandro Ruzi; Laura C. Harris; Chris Rohan; Tia Shearer; Carolyn Kashner; Bill Gillett; Yasmin Tuazon; David Harris; Zeke Alton; Todd Scofield; Bradley Smith; Chris Davenport; Jonathan Feuer; Andrew Quilpa; Evan Casey; Andy Clemence; Ren Kasey; Drew Kopas; Matthew Bassett; James Lewis.