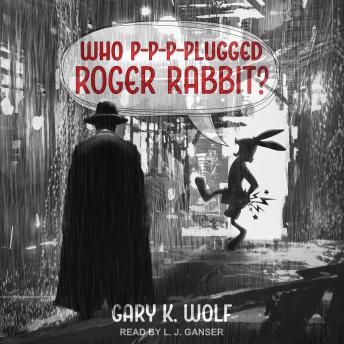 Who P-p-p-plugged Roger Rabbit? opens with a call from Roger to hard-boiled private eye Eddie Valiant. Roger suspects that Jessica is baking her carrot cakes for movie heartthrob Clark Gable. The scandal threatens to rob Roger of the Rhett Butler role in the soon-to-be-filmed Toon musical comedy Gone with the Wind. Investigating Jessica's alleged affair, valiant Eddie finds adultery turning to murder. In no time flat, he's up to his fedora in a nasty web of deceit, intrigue, and Hollywood corruption, including reports from all over of a swindling, cheating, blackmailing . . . Roger!!?!?! Something is really p-p-p-popping in Toontown!

Who P-p-p-plugged Roger Rabbit? is a comically brilliant sequel, as unique and original as the first time we saw Roger and Jessica together in Wolf's Who Censored Roger Rabbit?, the book that kicked off the whole Toon craze.