Who Will Be Your Judge 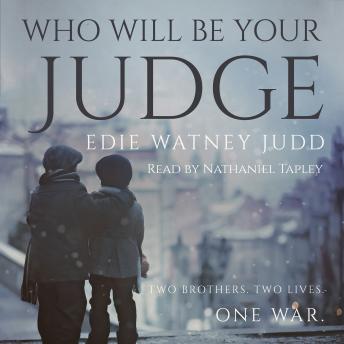 Who Will Be Your Judge is a historical mystery thriller that starts during WW2 and continues into 1960's gangland London. Two small brothers, Billy and Richard, experience a difficult childhood when growing up in the East End.
Evacuated from London during the Blitz, they are sheltered at the House of Nazareth and under the control of some viscous nuns. Life there is so bad that they prefer to go back to the bombs of London. The war, however, claims the lives of both their parents, and they are rehomed once more at Barnardo's until separated by adoption. George Seagrave adopts Richard and takes him to his family in the country where Richard has to adapt to strict Victorian rules. Billy in turn is claimed by a poor, childless couple in the East End.
As they grow, Billy's dream of becoming a professional boxer vanishes as he develops epilepsy. Bitter and angry he gets involved in smash and grab raids as he promises himself to get out of poverty. He works his way up to become a club owner in the West End. Richard, now a priest, hears about Billy's raids and tries to persuade his brother to give up that lifestyle. It is only when Billy is asked to clear his grandmothers flat and finds a letter a letter which contains a secret that everything starts to change for both him and Richard. This is a very powerful novel about family, war and gangland culture.

Who Will Be Your Judge