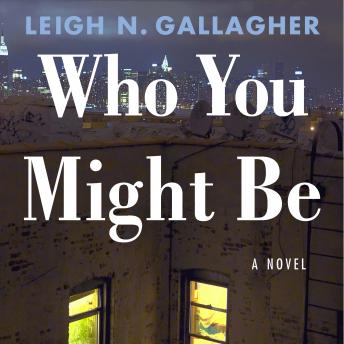 A fiercely original debut from Leigh N. Gallagher, Who You Might Be takes readers from 1990s Southern California to a UFOlogist holdout in Nevada, the graffiti playground of Detroit, and a self-important New York art scene in an unflinching examination of how life’s most unexpected turns—and the people we meet along the way—shape who we become.

It’s the late nineties—the dawn of the internet—and Judy and Meghan have lied to their mothers and run away for the weekend, to see a girl they’ve met in a chat room. Meanwhile, twelve-year-old Cassie, desperately clinging to childhood hopes, travels deep into the Nevada desert to reunite with her real mother at a strange and isolated compound. And, across the country, Caleb, an entitled teenager, is miserable following his family’s move from upper-crust San Francisco to boring Ann Arbor—until, emboldened by privilege, his tours of blighted Detroit become graffiti-writing escapades, with his faithful little brother in tow.

Each of these adventures derails in severe, alarming ways, only to resurface and collide two decades later in an unforgettable finale that explores the power—and limits—of the narratives that come to define us. Deftly written and peopled with precisely drawn, indelible characters pushed to great extremes, Who You Might Be considers the ramifications of life’s most trying encounters and the resilience it takes to determine for ourselves who we might be.

A Macmillan Audio production from Holt.

This title is due for release on June 21, 2022
We'll send you an email as soon as it is available!