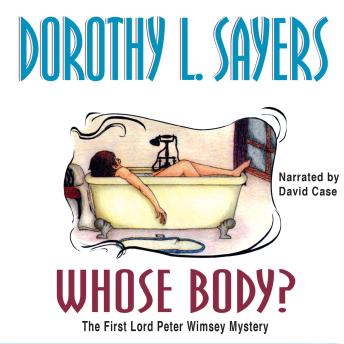 #1 of The Lord Peter Wimsey Mysteries

There’s a corpse in the bathtub, wearing nothing but a pair of pince-nez spectacles. Enter Lord Peter Wimsey, the original gentleman sleuth. Urged to investigate by his mother, the Dowager Duchess of Denver, Lord Peter quickly ascertains that the sudden disappearance of a well-known financier is in some way connected to the body in the bathroom. But discovering exactly which way they’re related leads the amateur detective on a merry chase.

Written by a master of the detective story, this atmospheric tale abounds in the cozy delights of an English murder mystery. Dorothy L. Sayers ranks with Agatha Christie as a defining author of the genre. A novelist, essayist, and medieval scholar, Sayers was among the first women to receive an Oxford degree, and her translations of Dante remain in wide circulation. This novel marks the debut of her most popular creation, Lord Peter Wimsey, whose continuing adventures unfold amid the lively world of upper-crust British society in the 1920s.

This book is the first in the Lord Peter Wimsey series, I believe, and it shows. The story itself was interesting but somewhat obvious--nonetheless, I enjoyed it. However, had I not been eager to reacquaint myself with the story, I wouldn't have suffered through the horrid narrator. He spoke all the women's voices in a breathy, high-pitched, practically apologetic tone, most of the men just sounded grumpy, and Peter Wimsey's voice was exceedingly "twee"--over the top and affectedly quaint. I probably won't listen to it again, and am actually sorry I purchased it.