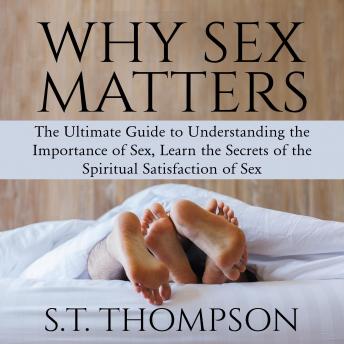 Why Sex Matters: The Ultimate Guide to Understanding the Importance of Sex, Learn the Secrets of the Spiritual Satisfaction of Sex
Sex is a universal media of pleasure for both men and women. It is not a sin and we need it to live in society. God created it as one of His blessings. Although in the past, this activity was viewed as only allowed between married couples, many people are already doing this activity even before marriage. Sex elevates your physical,m mental and emotional condition because you derive enjoyment and pleasure from doing this activity. Experts even say that when you are highly depressed, sex can help fight off your depression.
We often hear that sex is somewhat against religion but this is not the case. Sexuality and spirituality were never split until well into the first millennium of the Common Era when denial of the body became the popular theology of the day. And sex is something that creates intimacy and affection between a man and a woman. In marriages, it helps gain marital maturity. This audiobook will teach you all about spiritual sex. It will teach you how to have sex in a spiritual way.
This audiobook will discuss the following topics:
- Spiritual Sex
- Satisfaction in Sex
- The Mindset and The Spiritual Satisfaction of Sex
- The Benefits of Mindset in Satisfaction
- The Killer Ways of Boosting Your Mindset During Sex
- The Laws of Attraction and Satisfaction
- The Traits of Satisfaction and Dissatisfaction in Sex
- Tips and Secrets to Great Satisfaction Spiritually
Sexuality is often compared to spirituality because sex enables an individual to love and sacrifice. It helps foster a strong relationship between 2 persons.
If you want to learn more information about spiritual sex, scroll up and click 'add to cart' now.