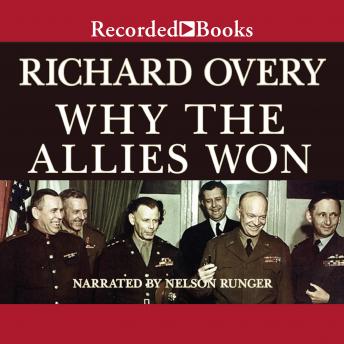 Why the Allies Won

In this fascinating consideration of the Allied war effort, historian Richard Overy answers one of the great questions of the 20th century. What led to the unmistakable Allied victory, when in the early stages of World War II, the balance of power so strongly favored the Axis? Searching for a compelling explanation, the author explores decisive military campaigns: struggles along the eastern front, the battles for the seas, the war in the air above, and the massive amphibious assault on Europe. He also considers key elements underlying victory, such as the quality of both political and military leadership, the pursuit of industrial strength, and the all important determination to win. A professor of modern history in London, Richard Overy clearly demonstrates that not one of these factors alone could make the outcome inevitable-only their compounded effect could bring victory. This multi-faceted look at the war that shaped the modern world becomes accessible with Nelson Runger's thoughtful performance-and you'll realize how hard-won the Allied victory truly was.

Why the Allies Won

This title is due for release on November 2, 2018
We'll send you an email as soon as it is available!