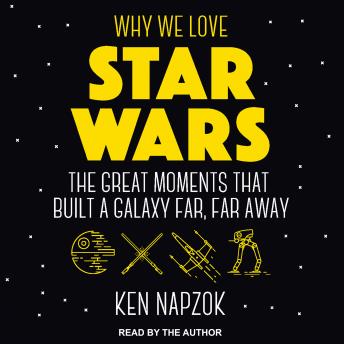 Why We Love Star Wars: The Great Moments That Built A Galaxy Far, Far Away

Celebrate the greatest saga ever told: All of us who are deeply influenced by the epic saga of Star Wars have our favorite moments. Each time the screen goes black and you see those words-'A Long Time Ago, in a Galaxy Far, Far Away'-the music blasts through you and you're a kid again. Ken Napzok, expert appreciator of Star Wars, counts down each one of those special moments that makes this series not just the best movies of all time, but the Greatest Saga Ever Told.

Become a scholar of Star Wars: What began as one movie about good people, evil oppressors, and the space wizards that stood between them has exploded into a franchise. The moments that continue to inspire are on screen and in the pages of novels. They are found in the panels of comic books and among animated sequences on television. And they all continue to grow in stature, importance, and myth through discussions, debates, and daydreams.

Why We Love Star Wars: The Great Moments That Built a Galaxy Far, Far Away is the ultimate gift for the film buff who has binged all 1001 Movies to See Before You Die and the superfan who covets Star Wars: The Visual Encyclopedia and Star Wars: Complete Locations.

Three actual LOLs, forty-seven chuckles, eighty-two agreeing head-nods, and one continuous smile. Going to give this at least one more listen before TROS, (and probably one right after). Thanks for this gem, Ken!