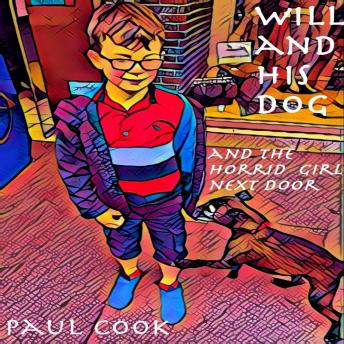 Will and His Dog and the Horrid Girl Next Door

Will is eight years old and lives with his mum, dad and his dog, Clive. Will’s life was just fine until a new family moved in next door. The new family had a daughter called Alex who Will did not like at all. Alex would not give Will Clive’s ball back when it bounced into her garden. Will decides to get his ball back in the middle of the night but things take a turn for the worse when he notices a man climbing over the wall into Alex's garden. This book contains a scene of very mild violence which might upset some readers. This book is the first of ten 'Will and His Dog' short stories written by Paul Cook for his eight-year old son to read during the COVID-19 lockdown. Matthew (Paul's son) read the stories as part of his homeschooling activities. He said that he enjoyed reading the stories (or he was just being polite) and so Paul decided to share them online. Will is eight-years old and lives with his parents and his dog, Clive. He spends much of his time with his best friend, Charlie, who is also eight and his eighteen year old neighbour, Alex. Will is a good boy but he does have an unfortunate habit of getting into situations that often land him in trouble. Why not share Will's other adventures as he finds himself locked in a church in complete darkness, being chased by an armed man who was stealing rare eggs from a nest and swept away by the current on a boat. These action-packed stories are suitable for children aged 8-11 years old. Some of the stories contain scenes of mild threat, a reference to ghosts, mild violence, scary scenes and the use of a firearm.