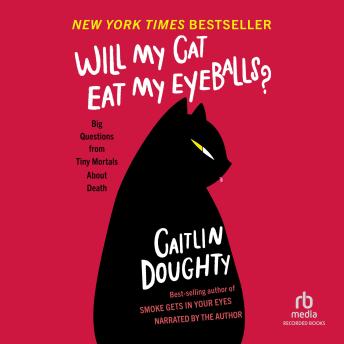 Will My Cat Eat My Eyeballs?: Big Questions from Tiny Mortals

Best-selling author and mortician Caitlin Doughty answers real questions from kids about death, dead bodies, and decomposition. Every day, funeral director Caitlin Doughty receives dozens of questions about death. The best questions come from kids. What would happen to an astronaut's body if it were pushed out of a space shuttle? Do people poop when they die? Can Grandma have a Viking funeral? In Will My Cat Eat My Eyeballs?, Doughty blends her mortician's knowledge of the body and the intriguing history behind common misconceptions about corpses to offer factual, hilarious, and candid answers to thirty-five distinctive questions posed by her youngest fans. In her inimitable voice, Doughty details lore and science of what happens to, and inside, our bodies after we die. Why do corpses groan? What causes bodies to turn colors during decomposition? And why do hair and nails appear longer after death? Readers will learn the best soil for mummifying your body, whether you can preserve your best friend's skull as a keepsake, and what happens when you die on a plane. Beautifully illustrated by Dianne Ruz, Will My Cat Eat My Eyeballs? shows us that death is science and art, and only by asking questions can we begin to embrace it.

Often times hilarious, always informative, sometimes morbid - but in a way thats ment to break the taboo surrounding talking about death. Caitlin Doughty is a wonderful, engaging writer and she's just as talented in narrating too. You won't be disappointed. Her other books are just as good, if not better.

I love Caitlin Doughty. I have been watching her YouTube channel for a while and I just had to listen to her books. I love that she is also the narrator being familiar with her voice it makes it even a better listen. This book answers all the questions that people wonder about death. I have learned a lot from Caitlin and I would definitely recommend this book.

Everything I didn't know I needed. Very enjoyable..

Informative but a lot of sarcasm. Liked learning

I loved this oddball bit of fact and whimsy. It’s such a surprising premise, made charming and funny by the wit of Ms. Doughty, writer and narrator. I think my siblings are receiving a surprise Christmas gift!

silly, but informative. Wouldn't listen again, but the Author/Narrator kept my attention most of the time.

I'm such a fan of Caitlin Doughty. A wonderful author and mortician.

great book for all ages

The book was very funny!!

Informative with witty commentary on an often times tough subject. It was great to hear it all in her own voice as well.

Superb book. As a geriatrician I learned much! Highly recommend and the narration is fantastic. Very witty

I'm a pathologist, so I feel like I've seen it all - but even I learned a few things! Great book about a subject that we all need to talk more.

Great listen! Will be getting all of her works for my bookshelf at home as well!