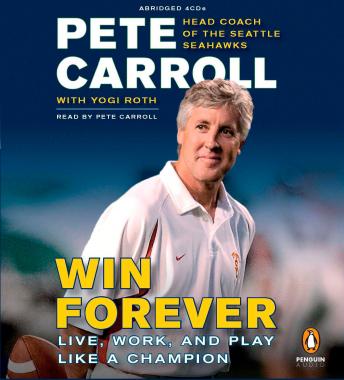 Win Forever: Live, Work, and Play Like a Champion

'I know that I'll be evaluated in Seattle with wins and losses, as that is the nature of my profession for the last thirty-five years. But our record will not be what motivates me. Years ago I was asked, 'Pete, which is better: winning or competing?' My response was instantaneous: 'Competing. . . because it lasts longer.''Pete Carroll is one of the most successful coaches in football today. As the head coach at USC, he brought the Trojans back to national prominence, amassing a 97-19 record over nine seasons. Now he shares the championship-winning philosophy that led USC to seven straight Pac-10 titles. This same mind=set and culture will shape his program as he returns to the NFL to coach the Seattle Seahawks.Carroll developed his unique coaching style by trial and error over his career. He learned that you get better results by teaching instead of screaming, and by helping players grow as people, not just on the field. He learned that an upbeat, energetic atmosphere in the locker room can coexist with an unstoppable competitive drive. He learned why you should stop worrying about your opponents, why you should always act as if the whole world is watching, and many other contrarian insights.Carroll shows us how the Win Forever philosophy really works, both in NCAA Division I competition and in the NFL. He reveals how his recruiting strategies, training routines, and game-day rituals preserve a team's culture year after year, during championship seasons and disappointing seasons alike.Win Forever is about more than winning football games; it's about maximizing your potential in every aspect of your life. Carroll has taught business leaders facing tough challenges. He has helped troubled kids on the streets of Los Angeles through his foundation A Better LA. His words are true in any situation: 'If you want to win forever, always compete.'

Win Forever: Live, Work, and Play Like a Champion