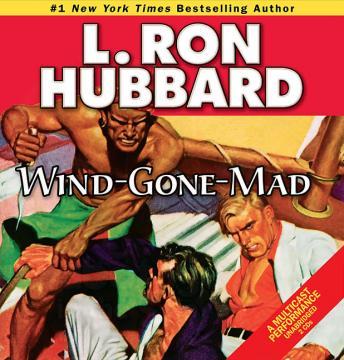 Launch into the action. In a tale played out during the last days of pre-World War II China and the rise of Communism, Jim Dahlgren, representative of the Amalgamated Aeronautical Company, has had enough of the fatalistic brand of diplomacy from other nations that claim to want a united China, one that can resist invasion from without and treason within, but which refuses to intervene and prevent it's demise..
And the damage is just too costly when lives are at stake, especially when a villain known as "The Butcher" is allowed to rise up with fire and sword carving the way on his warpath for complete control of the nation.

When Dahlgren disappears, purportedly to find a mysterious aviator, the man called "Wind-Gone-Mad" who has always fought against the province warlords, he ignites a series of actions which just may spell disaster. "Turned out to be a fun adventure, but the best treat was that this audio book featured the first ever published story by L. Ron Hubbard.This will be one of the most fun two hours you've ever spent. Enjoy!" -Gil Wilson, Gil-T Pleasures Blog