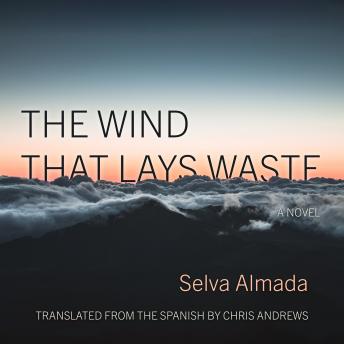 The Wind That Lays Waste: A Novel

The Wind That Lays Waste begins in the great pause before a storm. Reverend Pearson is evangelizing across the Argentinian countryside with Leni, his teenage daughter, when their car breaks down. This act of God or fate leads them to the workshop and home of an aging mechanic called Gringo Brauer and a young boy named Tapioca.

As a long day passes, curiosity and intrigue transform into an unexpected intimacy between four people: one man who believes deeply in God, morality, and his own righteousness, and another whose life experiences have only entrenched his moral relativism and mild apathy; a quietly earnest and idealistic mechanic's assistant, and a restless, skeptical preacher's daughter. As tensions between these characters ebb and flow, beliefs are questioned and allegiances are tested, until finally the growing storm breaks over the plains.

Selva Almada's exquisitely crafted debut, with its limpid and confident prose, is profound and poetic, a tactile experience of the mountain, the sun, the squat trees, the broken cars, the sweat-stained shirts, and the destroyed lives. The Wind That Lays Waste is a philosophical, beautiful, and powerfully distinctive novel that marks the arrival in English of an author whose talent and poise are undeniable.

Wind That Lays Waste: A Novel