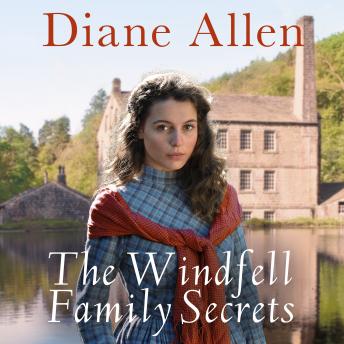 A moving Yorkshire saga, The Windfell Family Secrets is the much anticipated follow up to Diane Allen's The Mistress of Windfell Manor.
Twenty-one years have passed since Charlotte Booth fought to keep Ferndale Mill and her home at Windfell Manor following her traumatic first marriage. Now, highly regarded in local society and happily married to her childhood sweetheart, Archie Atkinson, she seeks only the best for their children, Isabelle and Danny. But history has a habit of repeating itself when Danny's head is turned by a local girl of ill repute, despite his promise of marriage to the far more respectable Harriet Armstrong.
Meanwhile, the beautiful and secretive Isabelle shares all the traits of her biological father, the notorious Joseph Dawson. And when she announces that she is to marry John Sidgwick, the owner of High Mill in Skipton, her mother quickly warns her against him. An ex-drinking mate of her late father who faces bankruptcy, Charlotte fears his interest in Isabelle is founded more upon self-preservation than any notions of love. What she doesn't realize is how far he's willing to go to protect his future . . .