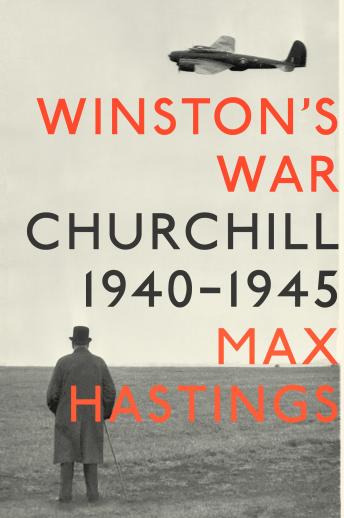 A vivid and incisive portrait of Winston Churchill during wartime from acclaimed historian Max Hastings, Winston’s War captures the full range of Churchill’s endlessly fascinating character. At once brilliant and infuriating, self-important and courageous, Hastings’s Churchill comes brashly to life as never before.

Beginning in 1940, when popular demand elevated Churchill to the role of prime minister, and concluding with the end of the war, Hastings shows us Churchill at his most intrepid and essential, when, by sheer force of will, he kept Britain from collapsing in the face of what looked like certain defeat. Later, we see his significance ebb as the United States enters the war and the Soviets turn the tide on the Eastern Front. But Churchill, Hastings reminds us, knew as well as anyone that the war would be dominated by others, and he managed his relationships with the other Allied leaders strategically, so as to maintain Britain’s influence and limit Stalin’s gains.

At the same time, Churchill faced political peril at home, a situation for which he himself was largely to blame. Hastings shows how Churchill nearly squandered the miraculous escape of the British troops at Dunkirk and failed to address fundamental flaws in the British Army. His tactical inaptitude and departmental meddling won him few friends in the military, and by 1942, many were calling for him to cede operational control. Nevertheless, Churchill managed to exude a public confidence that brought the nation through the bitter war.

Hastings rejects the traditional Churchill hagiography while still managing to capture what he calls Churchill’s “appetite for the fray.” Certain to be a classic, Winston’s War is a riveting profile of one of the greatest leaders of the twentieth century.

I wanted to like it but you REALLY have to know your history! I do love Churchill! Im sure if you know a lot about history you will love this book