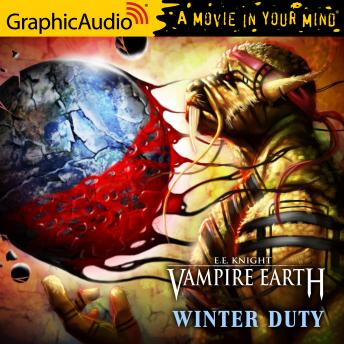 Major David Valentine and his fugitive battalion are the remnants of an expeditionary force shattered in its long retreat from disaster in the Appalachians. Between a raging blizzard, bands of headhunters, and the need to recover wounded soldiers lost during the retreat, Valentineis in for the toughest winter of his life. And Valentine is losing allies fast. Some of the clans in the region have declared themselves in favor of the Kurians, throwing Kentucky into civil war. But the Kurian overlords have determined that the region isn't worth the effort of another conquest. Their order: extermination. Performed by Ken Jackson, Tim Getman, Lily Beacon, Casie Platt, James Keegan, Dan Stevens, James Lewis, Kate Foster, Tony Nam, Mort Shelby, Dylan Lynch, Joseph Thornhill, Julie-Ann Elliott, Richard Rohan, David Coyne, Ren Casey, Tim Carlin, Scott McCormick, Barbara Pinolini, Elizabeth Jernigan, Eric Messner, Nanette Savard, Thomas Penny, Michael Glenn, Terence Aselford.