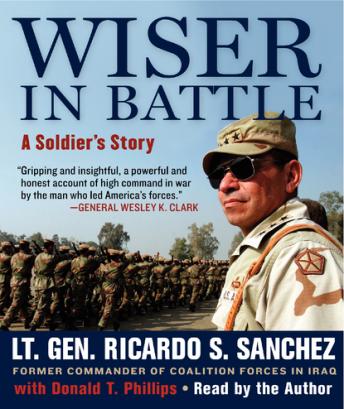 Amidst all of the criticisms of America's war in Iraq, one essential voice has remained silent . . . until now. In his groundbreaking new memoir, Wiser in Battle, LTG (Ret) Ricardo S. Sanchez, former Commander of Coalition Forces in Iraq, reports back from the front lines of the global War on Terror to provide a comprehensive and chilling exploration of America's historic military and foreign policy blunder.

With unflinching candor, Sanchez describes the chaos on the Iraqi battlefield caused by the Bush Administration's misguided command of the military, as well as his own struggle to set the coalition on the path towards victory. Sanchez illuminates the fallout of the communication breakdown between the leadership on the battlefield and the politicians in Washington.

The first book written by a former on-site commander in Iraq, Wiser in Battle is essential reading for all who wish to understand the current war and the American military's role in the new century.