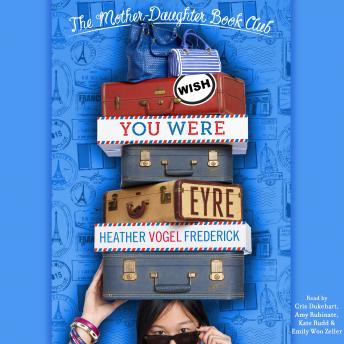 Wish You Were Eyre

The Mother-Daughter Book Club says bon voyage to Concord and bonjour to France!

It's a dream come true for Megan, who's jet-setting to Paris for Fashion Week with Gigi. Meanwhile, back in Concord, Mrs. Wong decides to run for mayor, so Emma and Stewart team up to make her campaign a success. Jess and Cassidy are also hoping for victories, Jess in the a cappella finals with the MadriGals and Cassidy in the national hockey championships with her teammates. In the midst of it all, the girls-along with their Wyoming pen pals, who drop in for a visit over Spring Break-dive into Charlotte Brontë's classic Jane Eyre. Some real life romance follows, as Becca may have found a Mr. Rochester of her own.
And then there's the matter of a certain wedding. The book club girls, their families, the British Berkeley brothers, and even Annabelle Fairfax (aka Stinkerbelle) will be attending the ceremony, which means there might be some bumps before the bride waltzes down the aisle...

Wish You Were Eyre