The Witch of Hebron: A World Made by Hand Novel 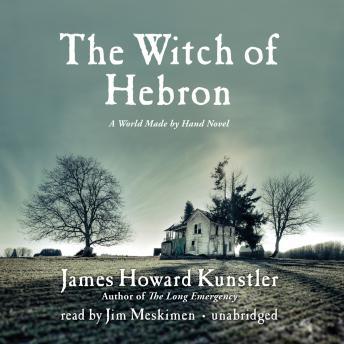 In the sequel to his bestselling World Made by Hand, James Howard Kunstler expands on his vision of a post-oil society with this novel about an America in which the electricity has flickered off, the Internet is a distant memory, and the government is little more than a rumor. In the tiny hamlet of Union Grove, New York, travel is horse-drawn and farming is back at the center of life. But it’s no pastoral haven. Wars are fought over dwindling resources and illness is a constant presence. Bandits roam the countryside, preying on the weak, and a sinister cult threatens to shatter Union Grove’s fragile stability. Here is a novel that seamlessly weaves hot-button issues like the decline of oil and the perils of climate change into a compelling narrative of violence, religious hysteria, innocence lost, and love found—a cautionary tale with an optimistic heart.
Already a renowned social commentator and a bestselling author, Kunstler has recently attained even greater prominence in the global conversation about energy and the environment. In the last two years he has been the focus of a long profile in the New Yorker, the subject of a full-page essay in the New York Times Book Review, and his wildly popular blog and podcast have made him a sought-after speaker who gives dozens of lectures and scores of media interviews each year.

Witch of Hebron: A World Made by Hand Novel