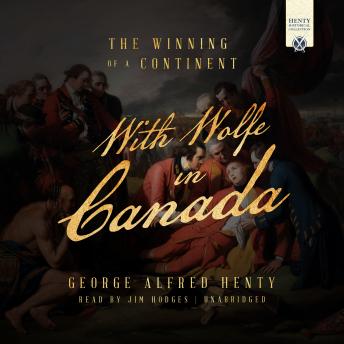 With Wolfe in Canada: The Winning of a Continent

Bring history back to life through Jim Hodges' historically accurate, exciting, and edifying audio recordings.
Shortly before the United States Revolutionary war against England, most inhabitants were her loyal subjects. France had control of much of southern Canada and the "western" lands of the current states of Pennsylvania and Ohio. Skirmishes abounded for years between English settlers pushing west and French settlers and her Indian accomplices. The Seven Years War in Europe spilled over to the colonies, where General Wolfe finally defeated the French in Quebec. This story includes depictions of the battles of Forts Duquesne and Necessity in Pennsylvania, and Forts Ticonderoga and William Henry in New York, and Quebec in Canada.
The Henty Historical Novel Collection, written by George Henty in the 1800s, covers many time periods in history throughout the world. In this collection, you will learn history, geography, and vocabulary while also discovering hero characters for your children to emulate. Study guides to enrich your learning experience are available at wwwJimHodgesAudiobooks.com/product-category/study-guides.

With Wolfe in Canada: The Winning of a Continent