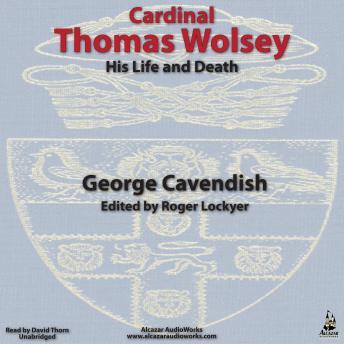 This extraordinary ""eye-witness"" account of Wolsey's rise and fall from power was written between 1554-1558 by his gentleman usher, George Cavendish. Cavendish was privy to much of the Cardinal's ambitious endeavours. Cavendish died three years after its completions at the age of 62. This rare document considered ""the most important single source for our knowledge of Wolsey"", was edited for easy comprehension by Roger Lockyer, former faculty member, Royal Holloway College, University of London and an authority on the tumultuous Tudor period which was so pivotal in England's storied history. This book was published with the kind permission of Roger Lockyer, with deference to The Folio Society of London.

AUTHOR
George Cavendish (1494-1562) was a British author, his best know work was ""Thomas Wolsey, Late Cardinall, his Lyffe and Deathe"". He was a player in the court of King Henry VIII, and offers detailed descriptions of court life and the politics of England in the 1500s.
Cavendish spent many years in service to Cardinal Wolsey and was an eyewitness to the volatile events that turn England from Catholic to Protestant.

COMMENTARY
Reviews for Alcazar AudioWorks' production of Cardinal Thomas Wolsey, His Life and Death
In CARDINAL THOMAS WOLSEY we have a primary source that presents like a novel. Intriguing historical figures such as Henry VIII, Anne Boleyn, and Thomas Wolsey himself are given increased color and depth through the contemporaneous observations of Wolsey's gentleman usher, George Cavendish. Most listeners will liken narrator David Thorn's presentation to that of a Shakespearean actor, which is appropriate since the major personages are featured in Shakespeare's HENRY VIII. Thorn's accent and command of English of the 1500s allow him to take on the persona of the good and faithful Cavendish with particular ease and authenticity. This skillful handling allows what could be stilted and difficult to be natural sounding and entertaining. M.O.B. © AudioFile 2009, Portland, Maine [Published: OCTOBER 2009]
"