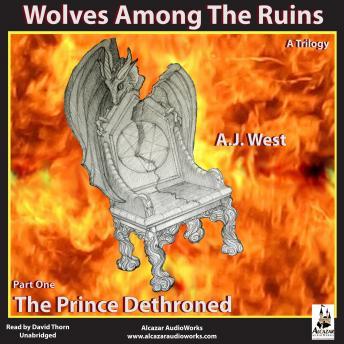 Wolves Among the Ruins

A very provocative look into the inner workings of the Catholic Church. This novel The Prince Dethroned, is part one of the Vatican thriller trilogy, Wolves Among the Ruins. The novel was published in March 2005. Expertly read by Mr. David Thorn of Oxford England, the story begins with the vigilante execution of a pedophile priest and the death of John Paul II. An obscure bishop from Palencia Spain is elected to the Papacy in a surprising move during the subsequent conclave. In an effort to bring stability back to the Catholic Church, which has been in chaos since the revolution spawn by the Second Vatican Council 1962-1965, Pope Francis I comes face to face with the real enemy intent on destroying the Church from within. This is a ""What If?"" fictional tale of Vatican intrigue and suspense that will have you on the edge of your seat.

AUTHOR
A.J. West is a theologian, philosopher, historian who brings all of his research, expertise, and experience to his writings. He received his degree with honors in philosophy and history from Loyola Marymount University in Los Angeles, California. He completed his studies in theology from the Pontifical University of St. Thomas Aquinas in Rome, Italy where is also graduated with honors with a Masters of Divinity. Mr. West had many audiences with Pope John Paul II during his time in Rome and also became friends with Mother Teresa of Calcutta while working with her Missionaries of Charity. His association and experience with various Vatican officials, along with years of research, gives him insight into the Vatican government and politics that qualifies him as a Vatican insider. He presently resides in Northern California. (Amazon.com)

COMMENTARY
Reviews for Alcazar AudioWorks' production of Wolves Among the Ruins: The Prince Dethroned
A story of future history looks at the present-day inner workings of the Catholic Church. Most of the story takes place at the Vatican with the selection of a pope. The influences of liberalism attack the church from the outside, but the real danger, according to West, is the threat from the inside subversives. The spellbinder of this production is the narration of David Thorn. His voice, often sinister, keeps the listener alert from the start.Thorn has the ability to deliver several accents, project different age ranges, and vary intensity, causing one to wonder if more than one person is performing. His masterful performance breathes life into what might otherwise be a lesser book. N.L. © AudioFile 2008, Portland, Maine [Published: FEB/ MAR 08]
"

Wolves Among the Ruins