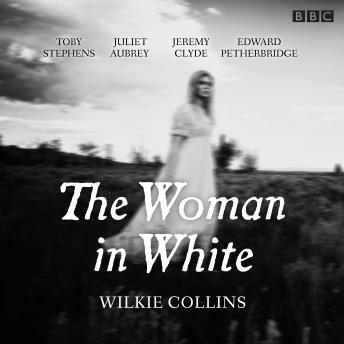 A lonely stretch of road on Hampstead Heath is the venue for Walter Hartright’s midnight first encounter with a mysteriously distressed figure in white. As he helps the woman to escape from unnamed pursuers, he has little understanding of the way she will affect his future.

At Limmeridge House, in Cumberland, Walter meets and falls in love with Laura, who strangely resembles the woman in white. She, however, is soon to marry the financially embarrassed Sir Percival Glyde. Events at Limmeridge take a surprising turn when Anne Catherick arrives, and Walter recognises her as the mystery figure.

It appears that Anne’s recent incarceration in a mental asylum was at the behest of Sir Percival, who is all too aware of the secret she holds. More than one life will be lost before Walter’s mystery of the woman in white can be fully explained.

A strong cast brings Wilkie Collins’ tale to life in this BBC Radio 4 production, recorded on location at Beacon Hill, London in 2001