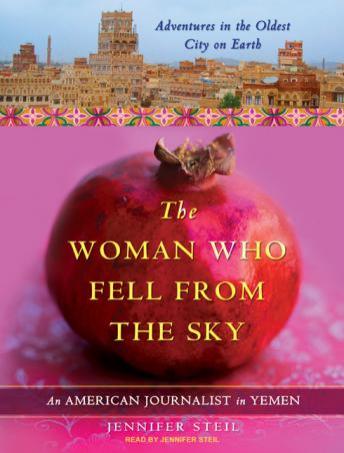 The Woman Who Fell from the Sky: An American Journalist in Yemen

Restless in her career and her life in general, Jennifer Steil, a gregarious, liberal New Yorker, initially accepts a short-term opportunity to teach a journalism class to the staff of the Yemen Observer in Sana'a, the beautiful, old, and very conservative capital of Yemen.

Seduced by the eager reporters and the enticing prospect of spreading democratic journalistic ideals there, she extends her stay to a year as the paper's editor in chief. But she is quickly confronted with the conservative realities of Yemen-and their surprising advantages. She discovers unexpected benefits in the concealment behind the modified burqa she wears. In teaching the basics of fair and balanced journalism to a staff that included plagiarists and polemicists, she falls in love with her career again. In confronting the blatant mistreatment and strict governance of women by their male counterparts, she learns to appreciate the strength of Arab women in the workplace. And in forging surprisingly deep friendships with women and men whose traditions and beliefs are in total opposition to her own, she learns a cultural appreciation she never could have predicted.

Woman Who Fell from the Sky: An American Journalist in Yemen