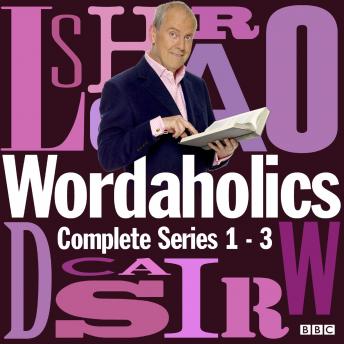 All 18 episodes of Radio 4's word-obsessed comedy panel game hosted by Gyles Brandreth, where stars from across the world of wordplay come together to guess the meanings of now-obsolete words, invent their own clichés and cockney rhyming slang, discuss their own favourite words and phrases - and suggest words they would like to ban.

This witty and unexpected show brings you toponyms, abbreviations, euphemisms, old words, new words, cockney rhyming slang and Greek gobbledegook. Find out the meaning of words like giff-gaff, knock-knobbler and buckfitches; the difference between French marbles, French velvet and the French ache; hear the glorious poetry of the English language, as practiced from writers varying from William Shakespeare to Vanilla Ice; and spend time laughing and learning with some of the finest Wordaholics in the business.

This title is due for release on June 28, 2018
We'll send you an email as soon as it is available!