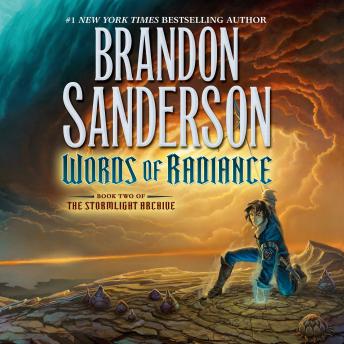 #2 of The Stormlight Archive

Expected by his enemies to die the miserable death of a military slave, Kaladin survived to be given command of the royal bodyguards, a controversial first for a low-status 'darkeyes.' Now he must protect the king and Dalinar from every common peril as well as the distinctly uncommon threat of the Assassin, all while secretly struggling to master remarkable new powers that are somehow linked to his honorspren, Syl.

The Assassin, Szeth, is active again, murdering rulers all over the world of Roshar, using his baffling powers to thwart every bodyguard and elude all pursuers. Among his prime targets is Highprince Dalinar, widely considered the power behind the Alethi throne. His leading role in the war would seem reason enough, but the Assassin's master has much deeper motives.

Brilliant but troubled Shallan strives along a parallel path. Despite being broken in ways she refuses to acknowledge, she bears a terrible burden: to somehow prevent the return of the legendary Voidbringers and the civilization-ending Desolation that will follow. The secrets she needs can be found at the Shattered Plains, but just arriving there proves more difficult than she could have imagined.

Meanwhile, at the heart of the Shattered Plains, the Parshendi are making an epochal decision. Hard pressed by years of Alethi attacks, their numbers ever shrinking, they are convinced by their war leader, Eshonai, to risk everything on a desperate gamble with the very supernatural forces they once fled. The possible consequences for Parshendi and humans alike, indeed, for Roshar itself, are as dangerous as they are incalculable.

This is by far my favorite of Brandon Sanderson's book. He is fantastic and cannot wait for the next. Michael Krammer and his wife Kate and fantastic amazing narrators. Please Brandon hurry up!

I was so excited for this second installment and was not disappointed in the least. I did struggle with kaladin's attitude throughout this book but loved everyone else. Sanderson is such s brilliant writer I cannot wait to see where he will take this story and all of the characters. The narrators were great and I am impressed that Kramer could keep all of his voices straight for each character.

Just like all other Brandon Sanderson books I've read completely mesmerizing and captivating.

cannot wait to read the 3rd!!!

Some of the story dragged but enjoyed the majority and the ending was epic per usual.

Delicious attention to detail and fraught with adventure.

I've been a big fan of Brandon Sanderson and his books for quite a while now. he is an amazing writer woth captivating worldbuilding and characterbuilding. Michael Kramer and Kate Reading are phenomenal narrators who help bring these books to life even more. It truly is a rare combination to have such well written books matched with the perfect voice actors.

Just as good as the first book.

Brandon Sanderson is a genius. Michael Kramer and Kate Redding are both extremely talented readers. Thank you for making it such an enjoyable experience to consume this story!

I've gotten 3 of my friends hooked on this series, and Sandersons writing. If you love science fiction/fantasy this is a must read series

I originaly thought that the narators where a little boring, but they grew on me and now I couldn't imagine this series without them.

I loved the first book and the second is an awesome follow up to the first. I can not wait to see what happens in the next 3 books!

Great book, but the narrators are a little too cheesy for my taste. I don't like all of the weird accents they give certain characters. But I guess that's personal preference.

Among the best of the best.

this ladys voice is so annoying. this book is amazing, but the narraraters. they are soooo boring. Like woah.

I have never listened to an audiobook before that had me jumping up and down with excitement and anticipation. Def a new favorite! The narration is fantastic.

Amazing book that keeps you on your toes, Brandon Sanderson is a master of his craft!

I love all his books so far. I'm hooked n I need a book fits lol

Excellent like most Brandon Sanderson's work. I can't wait for his next book in this series.

What an amazing book! I never thought that I would or could be excited about an audio book.

Narration felt rushed, even through conversations. It's already 15 hours longer than most books, another 5 or 6 would not make a difference. Especially if it's well read. Really liked the book.

This is my favorite Sanderson series thus far and an excellent sequel to The Way of Kings. My only complaint is with the female narrator, who is so far below par to Michael Kramer's skill at narration that it's almost laughable. I do wish they would replace her instead of insisting upon carrying her along throughout this fantastic series. Kramer is an expert in his craft. She sounds like a third grader by comparison. Still, this is the only way I'm able to enjoy books anymore and this series is absolute gold. Sanderson is a true scholar of the human animal. That combined with his keen imagination and ability to paint a vivid picture for the reader make his works exceptional.

Fantastic book! Narrators both did a good job, with believable but distinct voices for all major and minor characters.

Excellent follow up to The way of kings. I will wait with great anticipation for Oathbringer. It cannot come soon enough.

Can't wait for the next books of this series!!!!!!

A great read Brandon Sanderson seems to get better and better at writing.

Excellent book and excellent listen! Absolutely cannot wait for the next book to be released!!

Excellent book, can't wait for the next! Or the 7 after that either lol!

Absolutely amazing book (as any Brandon Sanderson book is) and I love the narrators in this recording as well.

I love the book and series so far. Very well written and entertaining. I like to listen while I work and in the car. Seriously can't get enough of these books.

I have fallen in love with this series from book one and my love has only grown since getting book two. Emotions run high in this book and continue to draw me deeper into another great read. Keep up the good work Brandon, can't wait to see what's next.

This book is amazing. so much is going on, yet the flow is Very smooth. keep it up Brandon. I'm a fan!

Words of Radiance has a better pace than Way of Kings. Brandon Sanderson does a masterful job of raising the stakes and creating great dialogue and sub plots. The narration is incredible. It is easy to tell who is who based on the wonderful voice acting!!!

Great book read by great readers. The guy reader had some bad chapters with his s sounds, but pretty minor.