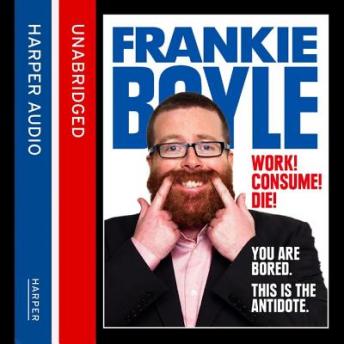 Brace yourself, Frankie’s back, and he’s more outspoken and brilliantly inappropriate than ever.


There are fears that this year could see the start of a double-dip recession, or worse still a double-dip-with-misery-sprinkles and f**k-where’s-my-job?-sauce. Why not chuckle into the howling void as taloned fingers reach up to consume you with Frankie Boyle’s new book, Work! Consume! Die!


In Work! Consume! Die! stand-up comedy's favourite pessimist, Frankie Boyle, offers his outrageous, laugh-out-loud, cynical rant on life as he knows it. He describes your reality as viewed through a bloodshot eye pressed against a shit-smeared telescope, focused on hell:

- ‘The X Factor will be allowed to show product placements. That’s powerful advertising. Last series I realised that looking at the judges alone had made me subconsciously buy a gnome, a scrag-end of mutton, a vacuous mannequin and a suspected gay.’

- ‘The Taliban are running out of bullets. Operation ‘Get our troops to absorb them with their bodies’ is finally paying off. The Taliban are finding it impossible to get hold of essential supplies – at last we’re fighting on equal terms. But let’s not get complacent. Just because they’re running out of bullets we mustn’t assume our boys won’t get shot. Remember, the US troops have still got plenty.’

A no-holds-barred tour de force of comic writing, Work! Consume! Die! is Frankie Boyle at his brutal, taboo-busting best. This is nothing more or less than the clanging call to arms of a dying mechanical God.