Workin' Our Way Home: The Incredible True Story of a Homeless Ex-Con and a Grieving Millionaire Thrown Together to Save Each Other 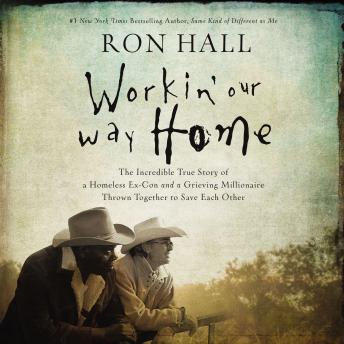 The heartwarming sequel to Same Kind of Different As Me! After Miss Debbie's death in 2000, her husband, Ron formed an even stronger bond with Denver, a homeless ex-con. Ron's touching memoir chronicles how their shared devotion to Debbie led them to work toward fulfilling her vision: to ease the pain associated with poverty, homelessness, and inequality.

Workin’ Our Way Home describes the ten years Ron and Denver lived together after Miss Debbie’s death. Written in both Ron’s and Denver’s unique voices, their inspiring (and often hilarious) adventures include:


- Their sometimes-bizarre life together in the Murchison Mansion
- Denver accidentally almost burning the house down—twice
- The challenges involved with making a movie
- Two visits to the White House
- Traveling the country to raise awareness about homelessness
- And much more!

With both wit and wisdom, these pages reveal God’s plan lived out through these men and those closest to them, including their passion to fulfill Debbie’s dream of mitigating the suffering and humiliation associated with homelessness and inequality.

Denver said it best: “Whether we is rich or whether we is poor, or somethin’ in between, this earth ain’t no final restin’ place. So in a way, we is all homeless—ever last one of us—just workin our way home.”

Workin' Our Way Home: The Incredible True Story of a Homeless Ex-Con and a Grieving Millionaire Thrown Together to Save Each Other