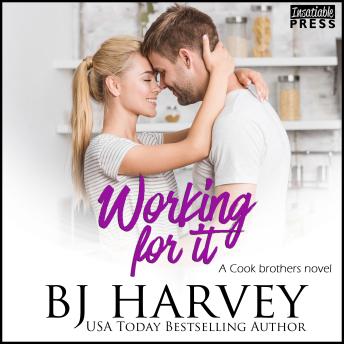 Working For It: A House Flipping Rom Com

Sometimes a surprise baby can lead to unexpected happy endings.***It started one night in Vegas over a naughty cocktail and dirty banter. Eight months of bedded bliss later, Gilly Nelson says the two words Ezra Baker never saw coming:“I’m pregnant.”Twice-divorced Ezra has always acted first, thought it through later. Except in Gilly he finds an equal; a strong-willed, independent woman who doesn’t need his money or kind heart to get ahead. She just wants him.Career-focused Gilly never imagined she’d be thirty-five, single and pregnant. Except when Ezra suggests they date rather than just mate, she finds herself wondering whether the man she’s been looking for has been in her bed all along.If they can survive raging hormones, house renovations, and the realities of childbirth, surely creating a family will be a walk in the park...right?***Working For It is a full-length house flipping romantic comedy that can be read as a complete standalone and is the fifth and final book in the Cook Brothers series. This is the story of the brother from another mother, Ezra Baker, and the one he never saw coming.

Working For It: A House Flipping Rom Com