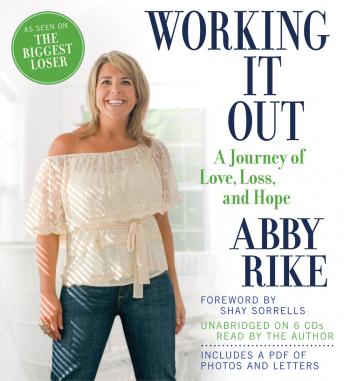 Working It Out: A Journey of Love, Loss, and Hope

In 2006, Abby Rike lost the life she knew and loved when her husband and two young children were killed in a car accident. Devastated and numb, she shut down. For nearly three years she walked through life like a spectre, present in body only. As she descended, so did her health.

Fortunately, Abby was not alone. She had loving parents, supportive friends, and a faith that continued to sustain her. Little by little she found the courage to return to life. Joining The Biggest Loser proved a catalyst for the physical and emotional changes she needed to make. In fact, against all odds Abby gained strength, courage, wisdom, and continued her steadfast relationship with God. Instead of anger, she found herself slowly but steadily healing. She lost a hundred pounds but gained hope.

In this riveting book, Abby tells her story -- from her joyous life before the accident to the unbearable pain that followed it and her eventual emergence as a woman reinvigorated by her faith in God. Today Abby's resilience and positivity are a testament to the power and importance of faith in the darkest hours.

Working It Out: A Journey of Love, Loss, and Hope