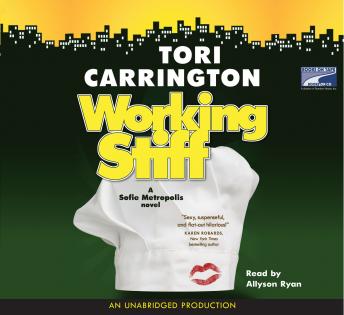 Sofie’s getting her feet under her as a PI and business is booming. So much so that she’s hired her (formerly) layabout cousin and a one-time petty criminal as “boys of all work.” Okay, so her reputation’s become, well, complicated–everyone in Astoria, Queens, knows that from time to time she shoots one of her own clients–but on the whole, she’s getting a lot more respect than when she was best known for leaving her groom at the altar.

In fact, Sofie’s just landed her first big criminal case–one so big that it’s on the news nearly every night. A young man from not quite the wrong side of the tracks has been accused of murdering his beautiful, wealthy girlfriend. His alibi’s a mess and his attitude’s worse. But his sister believes he’s innocent, and soon, so does Sofie. Now she just has to prove it–or find the real killer.

If only she didn’t have a host of distractions: a body disappears from her aunt Sotiria’s funeral home (it’s only a week before Halloween, so this might be a prank, or it might have something to do with the dead man’s mysterious life). Sofie sees her Dino keeping company with her sister Efi (are they flirting? how dare he? how dare she?); and Jake Porter returns, somehow connected to the missing body and, as always, making Sofie go weak in the knees. And since Dino’s otherwise occupied. . . .

Meanwhile, young Johnny is facing a life sentence. And Sofie Metropolis, budding PI, is his only hope.