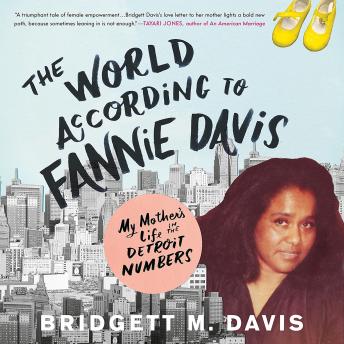 The World According to Fannie Davis: My Mother's Life in the Detroit Numbers

As seen on the Today Show: This true story of an unforgettable mother, her devoted daughter, and their life in the Detroit numbers of the 1960s and 1970s highlights 'the outstanding humanity of black America' (James McBride).
In 1958, the very same year that an unknown songwriter named Berry Gordy borrowed $800 to found Motown Records, a pretty young mother from Nashville, Tennessee, borrowed $100 from her brother to run a numbers racket out of her home. That woman was Fannie Davis, Bridgett M. Davis's mother.
Part bookie, part banker, mother, wife, and granddaughter of slaves, Fannie ran her numbers business for thirty-four years, doing what it took to survive in a legitimate business that just happened to be illegal. She created a loving, joyful home, sent her children to the best schools, bought them the best clothes, mothered them to the highest standard, and when the tragedy of urban life struck, soldiered on with her stated belief: 'Dying is easy. Living takes guts.'
A daughter's moving homage to an extraordinary parent, The World According to Fannie Davis is also the suspenseful, unforgettable story about the lengths to which a mother will go to 'make a way out of no way' and provide a prosperous life for her family -- and how those sacrifices resonate over time.

World According to Fannie Davis: My Mother's Life in the Detroit Numbers