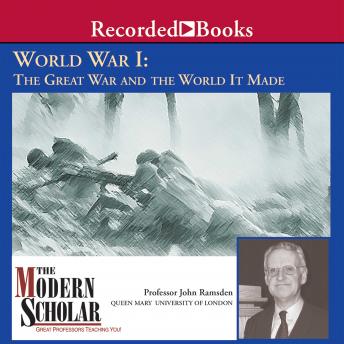 World War I: The Great War and the World It Made

'The Great War' as it was known at the time was also said to be the 'war to end all wars.' It seized all of Europe and much of the rest of the world in its grip of death and destruction. The first truly modern war, it changed how war-and peace-would be conducted throughout the remainder of the twentieth century and even to the present. The Great War was a time of 'firsts' and opened the door to the modern era. Almost all the major developed countries had a role to play in this war, as they never had before. This was the first time for fighting on land, at sea, and in the air. Modern weapons and munitions were developed in previously unimaginable quantities. By the end of the war, international politics, the relationships between the individual and the state, gender relations, and the role of artists and the media were all drastically changed. World War I laid the foundation for the modern world. This course examines the major events of the war to further understand how they led to the shaping of this new world.