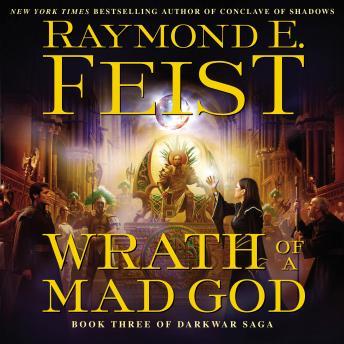 Wrath of a Mad God: Book Three of the Darkwar Saga

To save the future of both empires, the powerful sorcerer Pug and the Conclave of Shadows have journeyed into the darkest of terrain: the Dasati home world. There, traveling undercover among the bloodthirsty and ruthless Dasati, they have encountered Bek, a disturbing young stranger whose secrets may prove more important than Pug knows.

And back in the realm of Midkemia, as the young warriors Tad, Zane, and their friends protect the Kingdom from raiders, Miranda finds herself a prisoner of the Dasati, and, even more ominously, of Pug’s nemesis, the evil sorcerer Leso Varen. And Pug finds himself allied with a friend thought long dead, a friend whose remarkable powers will be sorely needed in the battle to come . . . a battle that will bring them all together in one great struggle for the future and very soul of Midkemia.

Wrath of a Mad God: Book Three of the Darkwar Saga