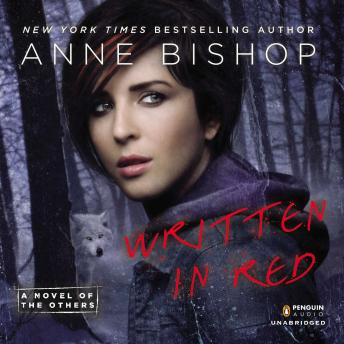 Written In Red: A Novel of the Others

#1 of A Novel of the Others

Enter the world of the Others in the first novel in New York Times bestselling author Anne Bishop’s thrilling fantasy series: a place where unearthly entities—vampires and shape-shifters among them—rule the Earth and prey on the human race.

As a cassandra sangue, or blood prophet, Meg Corbyn can see the future when her skin is cut—a gift that feels more like a curse. Meg’s Controller keeps her enslaved so he can have full access to her visions. But when she escapes, the only safe place Meg can hide is at the Lakeside Courtyard—a business district operated by the Others.

Shape-shifter Simon Wolfgard is reluctant to hire the stranger who inquires about the Human Liaison job. First, he senses she’s keeping a secret, and second, she doesn’t smell like human prey. Yet a stronger instinct propels him to give Meg the job. And when he learns the truth about Meg and that she’s wanted by the government, he’ll have to decide if she’s worth the fight between humans and the Others that will surely follow.

I love all of Anne Bishop's books and especially love the others series. it is addicting and hard to put down! Good narrator, just wish there was a way to distinguish when the terra indigine are speaking telepathically vs out loud. And am confused by some pronunciations.

She is an amazing, detailed and wonderful writer. I have been reading her for years Hurray for Anne Bishop.

Written in Red is my first Anne Bishop experience and WOW! This is not your usual story with fluffy and sexy shape-shifters. The Others teeth! Bishop has created a wonderful and complex world that I can’t wait to get more of. I’ve had Written in Red on my TBR list since I saw how much Jen at Red Hot Books loved. But after Carmel at Rabid Reads told me I HAD to listen to it because it was AMAZEBALLS I knew I had to move it up my reading pile and decided to go with the audio book since I had one credit left on my Audiobooks.com account. It took me a few chapters to get into Alexandra Harris’ narration but only because I felt like her male voices were not deep enough. And there’s not much of a pause when she changes scenes so I found myself confused in a few spots but once I got the hang of her narration it was all good. Her narration of Meg was just great. She had me crying for Meg when some of the shape-shifters were mean to her and at the times when she was scared. Harris’ narration and Bishop’s writing really made me feel connected to Meg. I read mostly UF and PNR books and I’m use to the werewolves, vampires and other creatures that go bump in the night be on the sexy side. Anne Bishop’s creatures are NOT romantic, alpha yes but not the kind to seduce you into their beds. No they see humans as “monkeys” and nothing more than food. That’s right ladies when these sexy beasts threaten to eat you, they’re not talking about your lady bits. The shape-shifters are more like animals that can change into human than humans changing into animals. Their animal sides control them in their actions, thoughts and even in their language. (I love how the crows called Meg, The Meg.) Bishop has created a wonderful and complex world that I can’t wait to get more of. I’m glad I picked up Written in Red. I can’t wait for the 2nd book, Murder of Crows to release next month (March 4, 2014). Favorite Quote: “You scare me like that again and I’ll eat you.” Review posted at : http://thebooknympho.com/2014/02/audio-review-written-in-red-by-anne-bishop/

I could not listen to this book due to the narration and the glamorized use of "cutting" Really???