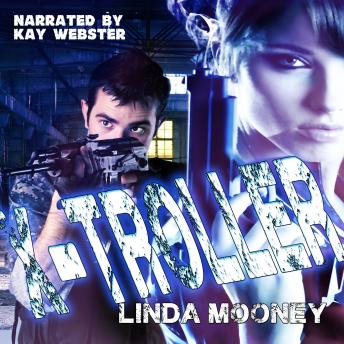 Kay Webster , Mooney
A free trial credit cannot be used on this title

Emotionally scarred and physically weary, Dwan is ordered to go forty-seven years into the past in a last ditch effort to find the one man who can help her fight the monsters created decades ago by a company called Lambruchet. Monsters that have since devastated mankind and the world.

Eli Voight has been battling the Lambruchet demons ever since the company had his father killed. As the first Troller, he’s made it his duty to bring down the creatures and find a way to permanently stop them. He’s skeptical of Dwan's claim that she’s from the future. But her skill is undeniable, and her presence becomes an all-consuming passion for the man who had pushed aside any thought of a personal life in his quest to drive the demons to extinction.

Dwan never expected to fall and fall hard for the emotionally unapproachable soldier. Worse, she knew what kind of death lay ahead for Eli, which meant there could never be a future for them.

Together, they must fight to take out the monstrosities, or else Earth as it is will cease to exist. And the Earth that could be, Dwan’s world, will only hold a future of horror and hopelessness.

This title is due for release on April 5, 2017
We'll send you an email as soon as it is available!