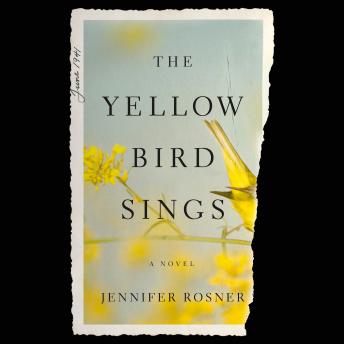 The Yellow Bird Sings: A Novel

This program includes an exclusive author's note read by the author.

In Poland, as World War II rages, a mother hides with her young daughter, a musical prodigy whose slightest sound may cost them their lives.

As Nazi soldiers round up the Jews in their town, Róza and her 5-year-old daughter, Shira, flee, seeking shelter in a neighbor’s barn. Hidden in the hayloft day and night, Shira struggles to stay still and quiet, as music pulses through her and the farmyard outside beckons. To soothe her daughter and pass the time, Róza tells her a story about a girl in an enchanted garden:

The girl is forbidden from making a sound, so the yellow bird sings. He sings whatever the girl composes in her head: high-pitched trills of piccolo; low-throated growls of contrabassoon. Music helps the flowers bloom.

In this make-believe world, Róza can shield Shira from the horrors that surround them. But the day comes when their haven is no longer safe, and Róza must make an impossible choice: whether to keep Shira by her side or give her the chance to survive apart.

Inspired by the true stories of Jewish children hidden during World War II, Jennifer Rosner’s debut is a breathtaking novel about the unbreakable bond between a mother and a daughter. Beautiful and riveting, The Yellow Bird Sings is a testament to the triumph of hope—a whispered story, a bird’s song—in even the darkest of times.

Praise for The Yellow Bird Sings:

'Rosner’s exquisite, heart-rending debut novel is proof that there’s always going to be room for another story about World War II....This is an absolutely beautiful and necessary novel, full of heartbreak but also hope, about the bond between mother and daughter, and the sacrifices made for love.' — New York Times Book Review

“Room meets Schindler’s List in The Yellow Bird Sings, a beautifully written tale of mothers and daughters, war and love, the music of the living and the silence of the dead. Jennifer Rosner is a writer to watch.” — Kate Quinn, New York Times bestselling author of The Huntress and The Alice Network

“The Yellow Bird Sings is a beautiful book in so many ways. Like Shira’s imaginary bird, Jennifer Rosner’s prose is lilting and musical, yet her tale of war’s grave personal reality is gripping, heartrending, and so very real.'— Lisa Wingate, #1 New York Times bestselling author of Before We Were Yours and Before and After