Yes: My Improbable Journey to the Main Event of WrestleMania 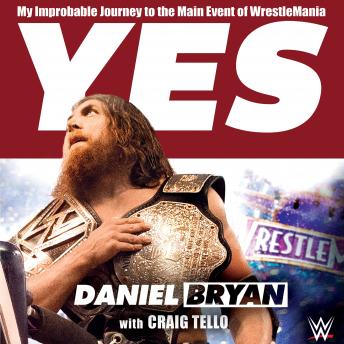 One of WWE's most unlikely champions of all time and also one of its most popular, Bryan has proved to the world and to all of WWE that looks can be deceiving. Just ask anyyone who's ever underestimated him . . . right before he went out and whipped the WWE universe into a frenzy.

This is Bryan's behind-the-scenes story told for the first time ever by the 'YES!' Man himself

from his beginnings as a child wanting to wrestle to his ten years circling the globe on the independent circuit and his remarkable climb to the upper ranks of WWE.

As the biggest week of his life unfolds, Aberdeen, Washington's bearded son reflects in full detail on his incredible path to the top and gives his take on the events that have shaped him. With his Bryan-ized blend of modesty and surprising candor, Daniel pulls no punches (or martial arts kicks) as he reveals his true thoughts on his evolution as a performer, his various roles in WWE versus the independent years, life on the road, at home, and much more.

And of course, get the untold story surrounding the 'YES!' chant that evolved to full-fledged movement, skyrocketing his career. This audiobook chronicles all the hard work, values, influences, unique life choices, and more, leading to his watershed week at WrestleMania 30. You won't want to miss it. Yes! We're sure about this.

Yes: My Improbable Journey to the Main Event of WrestleMania