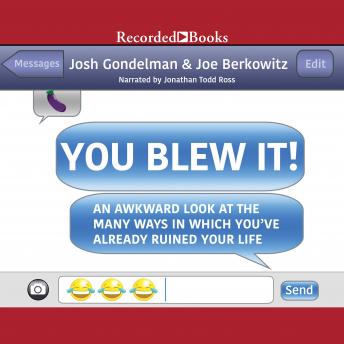 You Blew It!: An Awkward Look at the Many Ways in Which You've Already Ruined Your Life

A hilarious examination of faux pas for readers of Allie Brosh's Hyperbole and a Half and Jenny Lawson's Let's Pretend This Never Happened Humankind is doomed. Especially you. It's already too late. From overstaying your welcome at a party, to leaving passive-aggressive post-its on your roommate's belongings, to letting your date know the extent of the internet reconnaissance you did on them-you're destined to embarrass yourself again and again. In You Blew It!, Josh Gondelman, comedian and co-creator of the 'Modern Seinfeld' twitter account, teams up with Joe Berkowitz, an equally wry and ruthless social-observer, to dissect a range of painfully hilarious faux pas. Breaking down the code violations of modern culture-particularly our fervent, ridiculous addiction to technology-Gondelman and Berkowitz will keep you laughing as they explore how social blunders are simply part of the mystery that is you.

You Blew It!: An Awkward Look at the Many Ways in Which You've Already Ruined Your Life