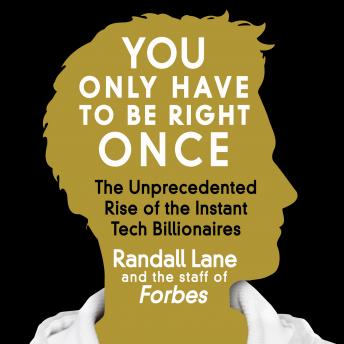 You Only Have to Be Right Once: The Unprecedented Rise of the Instant Tech Billionaires

The ultimate insider's look at the newest titans of tech, from the editorial team at Forbes

Silicon Valley's new billionaires are an unconventional breed, turning ideas into money at a rate never before seen in human history. Their ascension proves a turning point in how great fortunes are made and how technology disseminates.

Among these golden boys are: Elon Musk, billionaire bachelor and founder of Paypal, electric carmaker Tesla, and private space company SpaceX; Evan Spiegel, 23-year old founder of Snapchat, who recently turned down a $3 billion offer from Facebook; and Alex Karp, the eccentric philosopher with almost no tech background who turned Palantir into a data-mining champion.

Over the last three years, Forbes has published indepth profiles of this new batch of billionaires, including the founders of Spotify, Dropbox, Tumblr, and Twitter. Now, in a compilation introduced and updated by Forbes editor Randall Lane, fans and critics alike will get a comprehensive look at who these super-entrepreneurs are and what they say about their own success and their plans for the future.

You Only Have to Be Right Once: The Unprecedented Rise of the Instant Tech Billionaires