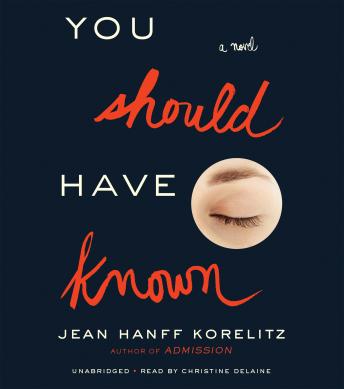 You Should Have Known

Grace Reinhart Sachs is living the only life she ever wanted for herself. Devoted to her husband, a pediatric oncologist at a major cancer hospital, their young son Henry, and the patients she sees in her therapy practice, her days are full of familiar things: she lives in the very New York apartment in which she was raised, and sends Henry to the school she herself once attended.

Dismayed by the ways in which women delude themselves, Grace is also the author of a book You Should Have Known, in which she cautions women to really hear what men are trying to tell them. But weeks before the book is published a chasm opens in her own life: a violent death, a missing husband, and, in the place of a man Grace thought she knew, only an ongoing chain of terrible revelations. Left behind in the wake of a spreading and very public disaster, and horrified by the ways in which she has failed to heed her own advice, Grace must dismantle one life and create another for her child and herself.

This is an excellent book. I haven't seen the film adaptation,and if I do I'll approach it as a separate work. Ever since Agatha Christie, books have been mangled in these adaptations. I've never been involved in the film industry, so I can't judge such practices, but I suppose there are justifications for them, but their ethics are obviously questionable. However, there's no question that in seeing the films and ignoring the original books, the consumer misses the creative genius of the author. In this case, that's sad.

I went back and forth between the audio book and the physical book. Mainly because the narrator’s choices for certain characters kind of got on my nerves. But there were so many different voices that they had to do that I can cut her some slack. I also wanted to read this before the series finale on HBO and I’m both pleasantly surprised and disappointed that the show and book at so vastly different. I didn’t enjoy the ending but it was a very realistic ending.