You'll Like It Here: The Story of Donald Vitkus--Belchertown Patient #3394 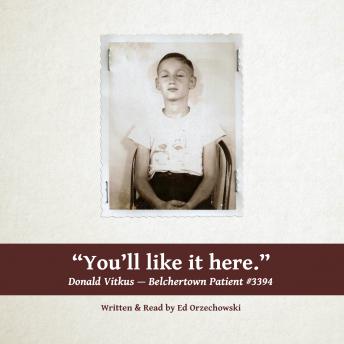 Abandoned by his unwed mother during World War II, Donald Vitkus becomes a ward of the Commonwealth of Mass­achusetts. He is 27 days old. Six years later as 'Patient #3394,' he is committed to Belchertown State School, where he is labeled a 'moron' with an I.Q. of 41. Like hundreds of other institutions across the country, Belchertown is a de-humanizing environment of barred windows, locked doors, and brutal regimentation. 'I never want us to return to those days,' Donald says. Growing up in the institution affects Donald's entire adult life--his Army service in Vietnam, his marriage and raising children, and his earning a living. Donald's life comes full circle when he earns a degree in human services and becomes a caregiver for individuals like those he grew up with.

You'll Like It Here: The Story of Donald Vitkus--Belchertown Patient #3394